Slovakia is one of Europe’s most mountainous countries, with lofty summits and deep-cut valleys making up almost a third of its area.  With the dramatic Tatra Mountains forming an amazing backdrop to this stunning area. The Carpathian Mountains in Slovakia has everything a photographer could wish for, beautiful landscapes and wildlife with that unspoilt feel to the whole area which is set in one of Europe’s most dramatic mountain regions. I’ve just returned from this amazing place after running a photo tour there with clients to photograph the beautiful Brown Bears that live in this region of Europe. It was my first trip there and I was blown away with the beautiful landscapes and wildlife.

This country offers a chance to get close to these amazing and powerful mammals from well protected hides. Where you are able to photograph wild Brown Bear in their natural habitat. Our hides were located at beautiful locations, very basic in design as they double up as places in which the rangers count the bear numbers. The scenery around each one was stunning, providing you with the perfect backdrop for Bear images.

Working from hides positioned in varied habitats gave us the best opportunities to photograph this amazing predator in the safest way possible. Each guest had the opportunity to photograph the animals in different locations against a variety of backgrounds, gaining a unique and privileged insight into their lives.

Photographing the Brown Bears took place mainly during the early mornings and nights, spending the time in these 2-3 person hides. During the day we grabbed as much rest as we could at our comfortable lodge and I also presented some slideshows which gave an insight to how I work and the key elements that I feel are important within wildlife photography. In between this I went through some of the images clients have captured, offering help and support to improve what they had already captured during their time with me.

In the 1920’s Slovakia’s brown bear population was almost eradicated by hunting.  From around 1932 until the 1960’s the hunting was stopped and the bears were protected. However, in the 1960’s this ban was lifted as the population of bears had reached a high level and conflict with humans was becoming a common event.  During this time though the population sharply dropped and by the mid 1980’s the bears were again at risk of eradication.

EU legislation was imposed as the European brown bear was now classed as an endangered species and therefore protected by EU law. To date the hunting of bears is still allowed in the Carpathian Mountains, but the number of animals killed is strictly controlled and only regulation shooting or protection shooting is permitted. Keeping the population at around just over 1,000 brown bears living in Slovakia’s mountains.

Still largely undeveloped, the glorious natural landscapes remain home to many animals such as Chamois, Marmot, Lynx, Eagles and Wolves. The mountains are also home to the brown bear, one of Europe’s most impressive and threatened predators. Amidst rugged mountains and ancient forests lies hidden one of the last strongholds of European wilderness. This whole area represents thousands of square kilometers of nature encircled by a sea of civilization.

It felt almost like a miracle that in the middle of Europe there still exists such a refuge for these amazing mammals. Throughout Europe there remains almost no area untouched by humans. Wildlife though is returning again to these places where it was once forced out. Around sixty years ago it wasn’t chamois or deer herds that roamed these valleys, it was cattle, grazing. Vast forest areas were destroyed and burned to make way for grazing areas for the livestock. Wolves were completely wiped out, and the entire National Parks records only showed several bears remaining.

Everything has changed since then, the valleys have become a safe home once more for the brown bears. Wolves are increasing their numbers with new cubs recorded each year. Species only found in primeval forests many years pervously are reclaiming their territories once again. This fascinating evidence of the power of nature tells us that many similar stories can happen anywhere in the world.  We only have to give nature enough time and space and by allowing this to happen the wilderness will return, and will become a place of inspiration for us all. A place where we can meet wild animals, living their lives in peace, while wondering through these ancient forests once more.

I felt I’d almost been transported back in time, hundreds of years back in time when these animals would have roamed all if not most of Europe freely without persecution. This story for me though is as much to do with the people who work and live in this area as it has the bears. Their patch covers hundreds of kilometers and staff and resources are thin on the ground to say the least. But it’s these guys here and many others throughout the world that are helping key species to hang onto life among the surrounding populations.

Whether it is Africa, India or here in Slovakia these people are key to the subjects survival, their knowledge, passion and love for the subject cannot be counted. In this area only 30 Brown Bears remain, the rangers have two camera trips, placed in and around these basic observation hides that we used, which record bear numbers at certain parts of the year.

Seeing a different environment for me always sends my brain into over drive, new smells, different tracks, different animals and remains of deer eaten by Lynx that roam these forests. I sat by the bones to try and get an idea of size through the prints of the these very rare animals.  Just sitting and watching always helps me in my thought process when trying to build a picture or recreate what went before me at that particular place.

To get any idea of the numbers of bears in this area or to see if any have gone missing the rangers place small amounts of maze around these hides. This is designed to basically get the bears to come to the area in which these several hides are placed. So they can keep tabs of the population. Either by using the camera technology or good old fashioned sitting and waiting. Censors are conducted once or twice a year at key times.

The other reason this food is put out is to hopefully discourage the bears at key times of the year traveling down to the towns and villages below these areas in which the bears live. Where conflict often results in the killing or serious injury of the bear, as people protect their property or livelihood.

To hear this was a shock for me and really sad as I hate any form of cruelty towards any animal, but in panic people often dont think until after the event.  Unfortunately this means that the lives of around 30 bears lie in the hands of wonderful and passionate people that work in this beautiful area daily. With population numbers increasing and tourism on the up, the bears sole existence is in the hands of man. On one side you have the gun, either to protect or to hunt them and on the other you have this amazing animal who was here first hanging onto life, while roaming these vast forests that once almost stretched the whole area of Europe.

They where just so amazing to watch and at times very comical and enduring. Here a female is seen scratching her nose area after a fly had just landed. The fly can just been seen hovering above after she’s moved the fly with her massive paw.

So for us as wildlife photographers on this trip, the real work of getting to see the bears had been acheived, as over the many years the rangers had placed maze as a supplementary food source, designed to bring these amazingly shy bears into a few areas of safety within this vast mountainous range, where you just may get the briefest of glimpses into their lives.

This place really only has one road in and one road out, you cannot roam around or create damage, as there are very strict rules in place to protect the wildlife. It’s also not safe to wander around because if you spook one of these bears they may attack you, otherwise they are frightened of man and just walk away. Often though at dusk you might see a lone bear using this road to navigate their way through the forests or just a short cut.

Once they have eaten the maze they disappear just as quickly as they had arrived, no playing around, no climbing, nothing. They are so quite for their size, and without any indication alot of the time they just turned up. Sometimes though you would hear a distinct noise of a fallen branch snap, breaking the silence of the moment, as a bear approaches or passes. Heart racing as your eyes almost pop out of your head looking for what had made the noise. Alot of the time the noises came from deep within the forest canopy so it left you wandering whether it was a bear or not.

I explained that as a wildlife photographer myself you have a duty of care to the subject but also to the viewing public, to tell the story and facts behind the image, as the power of wildlife photography rests on the belief that the image you captured represents an event that occurred naturally in the wild, something witnessed and recorded by the photographer with his/her camera at that given time. The moment it goes away from this is when you have to explain to the viewing public what is behind the image and how you took this.

For me personally you have to have a complete transparency to your work, even more so as a professional, in order for your peers and public to judge your skill when working with wild animals, demonstrating fieldcraft and sharing subject knowledge. In this case we wouldn’t have got near these bears without firstly the expert help from Jaro and secondly the small amounts of maze placed out for the bears.

This maze is only placed out for counting purposes at certain times of the year and for the very few photo tours that come to this beautiful place throughout the year. Again this is done so in such a delicate way as not to impact on any the wildlife and more so the bears. Which made the whole experience feel that bit more special knowing that only a limited amount of the public have been where you were sitting.

It was good to see that the bears hadn’t become use to the food and at the same time would never become use to humans or any form of interaction with them, which in turn will keep them safer from being harmed in the future. All that was left to do for us was to wait in those areas inside these very basic hides for our moment with this amazing and very rare mammal. 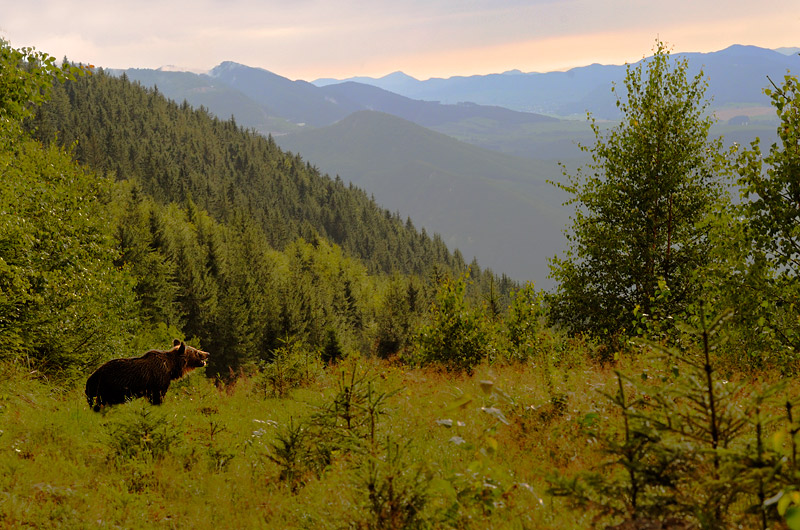 My aim as the professional wildlife photographer on this trip was to have all the clients ready for those moments and to have the confidence to use their equipment to the best of its ability, while watching and learning about this amazing predator. Everyone on the trip captured some really nice images of the bears, as at times they were elusive, which in turn made those encounters we did have just that bit more special.

I met some lovely people during my time there and I would like to thank every one of you for all the laughs, the company and for sticking with the early mornings and late finishes very well. I wish you all well in your photography, many thanks.